Growing up with a mum who had MS was… well it was what it was. Mum’s diagnosis was never the elephant in the room, it was something I just accepted.

I'm so lucky, in the sense that mum pushed me and encouraged me to follow my dreams of the arts. I always told her I’d give back to the MS Society for everything they've done to support her.

Welcomed into the MS family

In March 2016, my band The Tailormade were booked for our own headline show, which we used as an opportunity to raise money for the MS Society. Later that year we were invited to the MS Society Awards.

We were warmly welcomed and I got chatting to a couple who I can only describe now as purely inspirational.

Stu and Marie took us under their wing and welcomed us into the MS Society family. We soon became good friends.

I was at the MS Awards in May 2018 where Marie won the Carer of the Year Award.

She got a standing ovation and gave the most beautiful speech about being a carer, saying “you get up, you get on with it, it’s just what we do".

There wasn’t a dry eye in the house. What happened next only ever happens in cartoons - a light bulb appeared above my head!

A song must be written, about this team of two.

I’m pleased to be releasing this song for Carers Week to raise awareness and funds for carers all over the world and anybody living with or touched by MS. 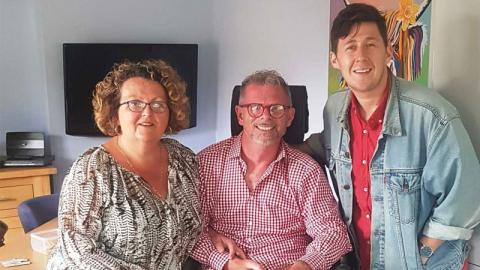 When we spoke to Marie, she told us

I wouldn’t change a thing

I knew Stuart had MS before we met. After watching him walk around the room, my fellow physios and I guessed at what was wrong with him.

That was some time before sticks, furniture walking and wheelchairs... But I wouldn’t change a thing.

We have laughed and cried for 21 years. Tears of laughter and fear. And frustration.

Another relapse, a fall, a building we can’t get into, another accessible toilet used for storage or just no toilet at all!

No one really knows what we have to do day by day, getting from one crisis to another. We’re both volunteers for the MS Society, getting involved in fundraising, research, speaking and hosting events. And that’s how we got to meet The Tailormade.

Stuart, being Stuart welcomed them with open arms.

Caring can be tough

In 2018, I won Carer of the Year at the MS Society Awards, after being nominated by my son. I’d always refused Stuart’s request when he wanted to nominate me.

The caring bit was ours. Things can be tough. But we know that it’s always one step at a time, one foot in front of the other. It’s just what we do.

I remember saying that when I won the award!

Our team of two

We’ve met The Tailormade at lots of events over the last few years, but didn’t realise what an impression we made.

To find out that they had written a song about us was something else entirely. We’ve listened to it quite a few times now - never without crying.

To know that it will be used to raise awareness for MS and for carers, makes me feel so proud. I’m honoured that someone spent time and effort writing about us - our very own team of two.

Taking care of yourself

If you give care and support to someone else it can be all too easy to neglect your own health and wellbeing.

Getting help and support

Caring for someone with MS can take its toll both physically and emotionally. Fortunately, there are organisations that can put you in touch with other people in the same situation, give practical help or simply listen.

If you're under 18 and have a family member with MS, you may be giving them extra help and support. Find out who you can go to for help.