If told that there was a chance of a cure for MS, most people, I imagine, would jump at it. Even if it was on the other side of the world.

Well, I took that chance. This was the 80s. So I jumped on a plane and travelled to Australia full of hope and trepidation.

The Australian osteopath and his theory

My destination was a clinic in Sydney that doubled as a gym. It was run by an osteopath who was the father of one of my friends.

His theory regarding MS was as radical as it was simple. By working on the body to make it strong, it would allow him to manipulate the spine to allow the cerebral spinal fluid to freely travel along the spinal cord.

His plan was to remove any blockages by building up the body through a series of weight training sessions.

His intent was to make the human frame strong enough to withstand as much extreme stretching and massaging of the muscles and joints in the body as was physically possible.

My torso was twisted until my bones cracked

In body building circles there is an expression ‘no pain, no gain’, and he worked my body accordingly. As I lay on the padded massage table, he massaged my back to make it more supple.

At the end of the session I would sit straight on the table with my hands cupping the back of my neck, whilst the osteopath twisted and manipulated my torso until the bones cracked.

In his view, normal chiropractics ‘just tickled’. What he did was no laughing matter - a shock to the system. But as already mentioned, no pain no gain. 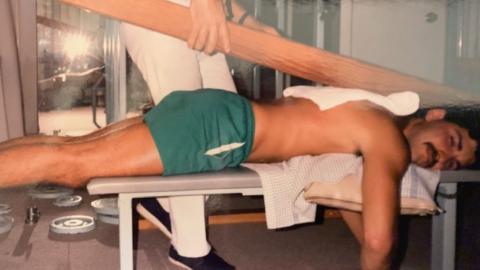 Body building was never my thing but as the weeks continued, I became more able to absorb and resist pressure to my body. The therapy took a new turn when something that resembled a blunt wooden T-shaped corkscrew handle was twisted into different areas of my back.

If I was getting better – and I was feeling better at the time – that didn’t mean to say I didn’t question what I was being subjected to.

However, what came next really did test my faith in the healing process down under. There was a 6 foot wooden beam that was soon to become my massage table companion. As soon as I was deemed physically ready it was chained to one of the table legs to act as a lever to crack my spine.

The treatment worked…until it didn’t

Certainly, I was fitter and feeling better and the treatment worked until it didn’t. These things happen. No reason as to why other than that’s just how MS is.

But for all the theory of a non-MS specialist the fact was he couldn’t buck the multiple sclerosis system. There are no shortcuts.

When I look back at those pictures, I can’t help but think: was I really that desperate to go to those lengths?  Of course I was. Would I do it again?  No, not to the other side of the equator, with travelling – and my bladder - being such an issue for me now.

As a 59-year old man, my inner wimp is always hopeful for something closer to home.

Martin is a writer and literary consultant. You can read more of his blogs at martinbaum.co.uk

Collecting for the MS Society in the 80s

With the forthcoming MS Awareness Week and World MS Day looming large, I’m put in mind of the first time I was out collecting on the street with a roll of MS Society stickers and a collection box.

I travelled to Mexico to have HSCT

3 years ago Miles was diagnosed with MS. He recently traveled to a clinic in Mexico to have HSCT. This is his story.

My Journey with MS podcast - episode 1

An occasional podcast about one man’s journey with a diagnosis of MS. In the first episode of this podcast, Adam talks about how he got diagnosed with MS, and how he dealt with the diagnosis.