Gillian blogs about how writing helps her manage chronic pain.

It’s often suggested that writing is a form of therapy. Usually, what people mean by this is that writing can help to process the experience of illness. It allows you to work through the difficulties you face when you are living with, for instance, multiple sclerosis.

I’d like to suggest, however, that the very act of writing can be good for you. I discovered this, personally, quite by accident.

My MS diagnosis and experience of pain

On a Thursday night in the March of 2007 my feet went numb. By the Monday morning I had numbness and altered sensation (I would later learn this was called dysesthesia) from my toes to my thighs.

Over the course of the next two weeks both had spread to my torso and, from there, down my arms into my hands and fingers.

Weeks later I was diagnosed with relapsing remitting multiple sclerosis (suspicions had been raised due to my symptoms and an incidence of optic neuritis fourteen years earlier and were confirmed by an MRI and a lumbar puncture).

I was given a succession of drugs to try to find one that would reduce the neuropathic pain I was experiencing. Unfortunately, none of them worked.

Words rattling around in my head

Luckily, having been banished to bed, I began to write (after I’d played several hundred games of solitaire on my laptop). For nights on end I would wake up in the wee small hours with words rattling around in my head.

I would then spend hours and days trying to make sense of them. As I did, these words seemed to arrange themselves into long, thin shapes that might almost be mistaken for poetry.

After months – and twelve poem-shaped slivers of memory – words stopped waking me up in the middle of the night.

Writing took my attention away from pain

By this time, though, I was hooked. The reason for my addiction to writing was that when I was fighting with word after word and line after line, I wasn’t aware of the invisible shards of glass sticking into my skin. When I stopped writing, my nerve pain would return.

This way of coping with pain is linked to ideas around distraction technique: the goal being to train your mind to shift the focus of your attention to something other than the pain.

I began to write short stories inspired by my interest in the people I would see in the waiting rooms of hospitals, clinics and GP surgeries.

I made up stories about the lives of the people I saw: a young man struggling to stand up. A middle-aged couple bickering their way through the dead time until the name of one, or the other, was called. A well-dressed woman speaking quietly into her phone. An elderly couple holding hands.

I developed characters with a neurological illness. I was curious to see what effect it would have on them: on their relationships; their friends and their family. Perhaps it was a way for me to explore the future. More importantly, it kept my neuropathic pain at bay.

Read more about pain and MS 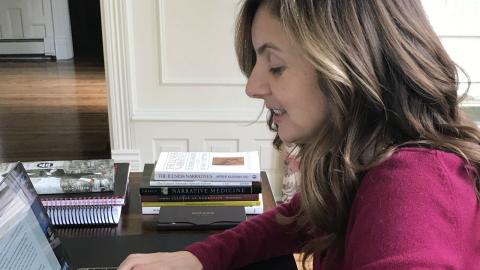 If you do like to write, and you have chronic pain, why not give it a go? If you’re interested, here are a few writing exercises you could try out.

Read one of Gillian's poems

Cyan sea merged
into sapphire sky
on a chill spring day.
The last gift
of a loved one
bequeathed
from his hospice bed.
Arctic water startled toes
awakening from a trance -
a whispered dream
realised at last.
Feet, now liberated,
splashed in icy shallows
while limbs,
still hungry for release,
basked in a crisp sun.
I bathed
in a silent song
as I walked,
slowly,
feet wet and gritty,
along Croy Shore.

A lot of people with MS experience pain at some time. It varies from person to person and over time, but drug treatments and other therapies can help you cope.

Finding a fun hobby that absorbs your attention can make a real difference. We spoke to people who’ve found pastimes that help them to navigate life with MS.

How bullet journaling helps me manage my MS

A year after my MS diagnosis a dear friend suggested that starting a bullet journal might help me manage my MS.