I’d been plagued by UTIs (urinary tract infections) for a long time. After a few years just about coping with regular antibiotics and tablets for bladder urgency, something more drastic had to happen.

I left hospital with new crutches after my first bad UTI in 2013. I now struggle transferring on and off the toilet from my wheelchair, and any infections knock on to my MS, leaving me weaker. After another severe UTI and stay in A&E last year, I was reintroduced to my urologist.

My bladder ultrasound showed it wasn’t emptying. A few years ago I had a residual post pee volume of 300ml… which had risen to 600ml. That was after urinating 600ml, my bladder is big.

Having a bladder that never fully empties means you’re giving bacteria a permanent home. Then when they do amount to a UTI, antibiotics just suppress the infection without getting fully rid. The bug I grew in my bladder last spring was a nasty strain of E-coli, resistant to all but three antibiotics.

On top of that, CT scans showed I have kidney stones, so need to be drinking nearly four litres a day. On top of an overactive bladder that doesn’t empty, and limited mobility transferring to the loo, this was never going to happen.

Ultimately, due to MS, the nerves which instruct my bladder muscles don’t work, and being unable to walk and stretch also inhibits bladder efficacy. Self-catheterisation is the best option on paper (“It’s like using a tampon!” male urologists have told me). It is kind of like a really small bendy tampon in a really small hole which isn’t designed to let things in.

I tried it a few years ago when I was mobile enough to get on and off the floor, and before my right hand lost dexterity. It was hard. And unless you’re doing it four times a day, it’s going to give you more UTIs than it prevents.

A permanent catheter then. A catheter through the urethra isn’t favoured long term by doctors or patients. It eventually stretches your urethra, can be uncomfortable and limits sex. A suprapubic catheter is a plastic tube coming out of your stomach, allowing you to fully drain your bladder.

When it was first suggested to me, I recoiled. It’s another official step downwards. I went home and googled images of them. The results were like a gallery from some failed wartime medical experiment (the surgeon told me they’re all the bad ones… sure). But, it was the best of the options available, so we scheduled surgery. 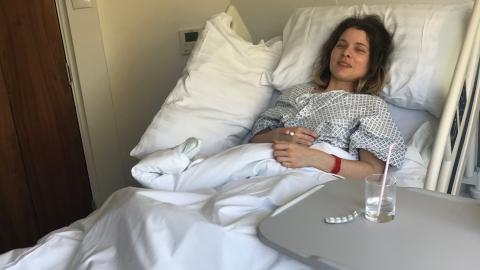 The operation and post-surgery complications

The surgery I was told went well. I was under local anaesthetic and heavy sedation so blacked out before entering the theatre. Instantly after coming round I reached to feel the plastic sticking out of me. It’s weird, and like much of MS, you have to grieve how your body used to be and shift your self-image.

I was discharged with a plethora of plastic accessories: a week’s supply of catheter bags, valves, bag stands, and leaflets. My main impression was the discomfort in my urethra. It feels like a burning UTI, it’s uncomfortable. Your bladder now has a plastic balloon rolling around in it and resting over your urethra. That feeling lasted about a week which was a relief, but I wish I’d been warned of it.

The discomfort was soon overtaken by a fever which emerged two days after the operation and wouldn’t subside. On day four, I was admitted back to hospital for a week. It was never established whether I had caught an infection or virus, and CT scans couldn’t find any bladder or bowel damage from surgery. So the exact cause remains a mystery. I’m not trying to scare anyone, but it’s a pretty invasive surgery, which I was naïve to.

I was so focused on the catheter itself, I assumed the skin around it would just close like an ear piercing. On my initial review post-surgery, I was told the wound was still healing but looked fine. But six months on and the site was red, discharging, and if prodded, bled. Most of the time it was covered in a dressing to avoid staining all my underwear.

The issue is ‘granulating’, where my body keeps trying to heal and grow new flesh over the cut. A malfunctioning immune system is the basis of MS, so it shouldn’t have been a surprise. A new steroid cream has finally helped (hence the photo), but I’m being re-referred to a urology clinic to look into it fully.

Catheters and the extra burden of managing MS

As anyone with MS knows, chronic conditions take management, and a catheter is a big addition to your health admin.

It took a few months post-surgery to have the prescription process established. Every month you have to call a supplier to order bags and valves, which they request from your GP, who responds with the prescription, which is then delivered to you. If that all works smoothly then great, but let’s be real. One of the things I resent most about having MS is the burden of managing the condition. As if having it isn’t enough, I could fill my life opening letters from the NHS and social services, chasing medical suppliers and coordinating accessible transport.

On top of the catheter prescriptions, the catheter tube itself needs changing every 12 weeks. My first catheter change in hospital was harrowing. The nurse pushed my new catheter too far into my belly, down and out through my urethra. That hurts, and then required a course of my old friend, UTI antibiotic nitrofurantoin. It’s been changed successfully by a district nurse since, but it’s still a fairly unpleasant process, and the discomfort of the new balloon in my urethra lasts around a day. 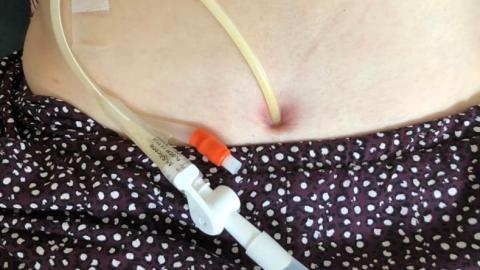 Everyday life with MS and a permanent catheter

You can either connect the catheter to a bag or a flip-flow valve. I choose to have a valve during the day, which I drain into the toilet, and a bag overnight, so my bladder is empty while I sleep. For me it’s to hold on to a sense of normality of ‘needing a wee’, plus the vanity of not wanting a bag attached to me.

The sensation of emptying my bladder through the catheter isn’t as satisfying as going for a pee, and it takes a minute for your nerves to feedback which is strange. I do love the freedom away from being reliant on disabled toilets and a physical helper, and to know that I can drink tea when I’m tired without stressing about how I’m going to get on the toilet after. And it’s a good feeling to empty my bladder and know it’s actually empty.

Your definition of ‘choice’ changes

The main thing has to be that since having the catheter I have had just one, straightforward, UTI. Despite not always monitoring how many litres of water I’ve drunk, not taking prophylactic antibiotics, and having sex.

Once you have a catheter, a urine dip test will always show positive, and so UTI diagnosis is based on symptoms.  For a veteran like me, cloudy urine, headaches, and feeling as strong as a tissue are sufficient signs. Five days of antibiotics and it was better. Ultimately, that was the reason for the catheter, I couldn’t go on living with the constant infections and their terrible effect on my MS. Even when I sit on the toilet and wee, there is always a lot more which drains out of my catheter after, so I know that I would still be having infections without it.

So no, I don’t want a catheter, just like I don’t want a wheelchair, or to have MS at all. But, as we know, your definition of ‘choice’ changes. My bladder had taken over my life before, and I wouldn’t want to return to that.

Will you help us stop MS?

We’ve now reached a crucial moment in our journey towards stopping MS.

You can help drive our research forward - so everyone with MS can get the treatment they need.

Donate now and together we can stop MS

Bladder problems are common in MS, but there are ways to manage. Find out about problems with storage, emptying and urinary tract infections.

There are lots of way to manage bladder problems in MS. Read about drug treatments, catheters, Botox and more.

Our MS Helpline gives emotional support and information to everyone living with MS. Give us a ring to chat about everything MS, or get help with benefits, legal advice and getting active.