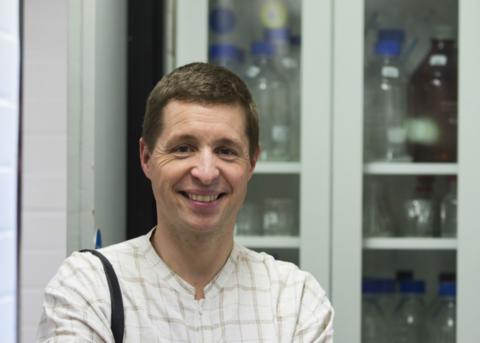 He is passionate that people with MS understand their condition so they can make informed decisions about their future.

Exercise proven to help in MS

Research shows that exercise can improve many symptoms common in MS and improve wellbeing.

A new study suggests that some disease modifying therapies (DMTs) have the potential to benefit people with progressive forms of MS.

2018 has seen significant progress for MS research, but there's been disappointment too. Our new Research Strategy ensures we continue to be at the forefront of science delivering real change for people living with MS.

Managing MS pain - what does the research say?

Many people living with MS will experience pain as one of their symptoms. It can occur at any time, come from more than one source, or result from other symptoms, like spasticity or fatigue.

Firing up your own stem cells

For decades people believed the brain was a fixed system that couldn’t regenerate or repair itself. But in 1998, a group of Swedish scientists showed that new nerve cells could form in the adult brain. Further research found that these new nerves developed from a type of stem cell, called a neural stem cell. This revolutionised researchers’ hopes for treating MS. Their focus has been on how to encourage neural stem cells to develop into oligodendrocytes - the cells that can repair myelin.

MS in a dish

Imagine being able to take a human skin cell and change it into a nerve cell, or a myelin-making cell, or an immune cell - just by adding a few chemicals. It sounds like something out of a science fiction novel, but thanks to the work of Nobel Prize winners Sir John Gurdon and Shinya Yamanaka, it’s now a reality. Researchers can take skin samples from a person and, in the lab, push these adult cells back into being stem cells. These ‘induced’ stem cells have the potential to become any cell in the body. Because of this, they are known as ‘induced pluripotent stem cells’, or iPS cells. iPS cell technology has opened up a whole new avenue of research, which our scientists at the MS Society Edinburgh Centre for MS Research are taking full advantage of. Led by Professors Charles ffrench-Constant and Siddharthan Chandran, they’re using iPS cells to grow unlimited numbers of human-derived nerve cells and myelin-making oligodendrocytes in a dish.

7 things you need to know about HSCT

Autologous haematopoietic stem cell transplantation (HSCT) is now a recognised treatment for some forms of MS.

We know how hard our supporters work to raise money for MS research, so we make sure it’s spent on science that will have the biggest impact for people living with MS.

A moment that changed MS research - 20 years ago

On 16 January 1998, Professor Richard Reynolds set off to personally collect the first human brain for the MS Society Tissue Bank at Imperial College. Since then, the centre has grown to become a vital resource for researchers all over the world.

A year of breakthroughs

2017 saw a number of firsts in the world of MS research. We’re not there yet, but the last 12 months show stopping MS is within our grasp.

Behind the headlines: MSCT and MS

MSCT (or mesenchymal stem cell therapy) is an exciting new area of research being explored as an MS treatment. And it was featured in a Channel 4 documentary which followed lawyer Mark Lewis as he took part in an MSCT trial in Jerusalem.

Behind the headlines: does being in the army increase your risk of dying from MS?

A new study suggests that being in the army may increase your risk of dying from complications to do with MS.

Hopes for LIF – what’s the evidence?

Reports of a potential new approach to manipulating immune cells have popped up in the news. We look at how close it is to delivering a treatment for MS.

The research triple whammy that will stop MS

We now know enough about what goes wrong in MS to know what needs to be done to fix it. Scientists are working on three ways to tackle MS: stopping the immune damage, promoting myelin repair and protecting nerves from damage. We're not there yet, but we believe that if we achieve these goals then we can stop MS.