I’ve always wanted kids. Being diagnosed with MS in 2014, and then getting married, made me think more about it.

But I went on a disease modifying therapy (DMT) for quite a while before coming off it to try for a baby.

I had quite a lot of worries about pregnancy and MS. I was worried about passing MS onto my children and that pregnancy would make my symptoms worse.

Then I went to a Living with MS information day in Belfast. One of the speakers, Catherine Doran, talked about being worried about having children when she was diagnosed - but she went on to have two girls. That really spoke to me as I was hearing from someone in the same situation as me.

Read our information pages on pregnancy and MS

My experience of pregnancy

I was concerned about coming off my MS treatment, and how long I would give myself to stay off it while we tried. Luckily I fell pregnant quickly.

The first few weeks of my pregnancy I was really sick and in hospital with severe vomiting. I was quite worried that because I was sick I would relapse, but I didn’t.

Overall I was OK during my pregnancy and my symptoms did become less active. I had bouts of fatigue, but that was mixed with normal ‘growing a baby’ tiredness. The fatigue only lasted a day or two and then thankfully got better.

Would I have a relapse after having my baby?

My other big worry was around relapsing after I gave birth. If I did, would I be able to look after a baby when my husband went back to work? One of my main symptoms is fatigue so I was worried that I would be completely bed-ridden. And I wouldn’t just be caring for myself – a little human would rely on me 24/7.

I talked through these things with my husband, and my neurologist. She reassured me that hopefully I wouldn’t relapse, you just don’t know, and to get back on medication as soon as possible after having the baby.

I also joined a Facebook group for new mums with MS and it was helpful following other people’s stories. There were lots of people who had the same concerns as me who were doing OK. 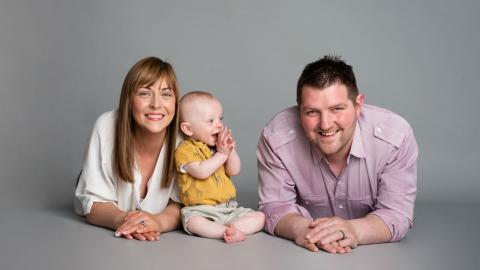 Baby Alexander was born in August 2018. I didn’t relapse after his birth. But it’s something you do worry about and everyone’s experience is different.

I am completely in love with him! He is one now and he has certainly kept us on our toes. He was quite unwell for the first 6 months of his life and ended up in hospital over Christmas. However we are at the other side of the tunnel now and he is such an active and fun loving little boy who makes us both so proud.

If you’re thinking about having children

I’d say talk to new mums, talk to your MS nurse and read information from the MS Society. Just don’t Google everything!

I’m part of a WhatsApp group for younger, newly diagnosed people and I got a lot of support from them. It’s nice to talk to others who are going through the same journey in life and who I can ask questions about things like relapses and symptoms.

It’s easy to overthink it but then you get stressed. You can’t worry about the future, you just have to live your life the best you can.

Deciding to have a baby is one of the hardest decisions you’ll have to make. Throw MS into the mix and it becomes even harder.

Many women who have MS are diagnosed in their twenties and thirties, at a time when they may be thinking about starting a family. Having MS shouldn't stop you from having a baby, but careful planning with family, friends and your doctor is important.

Becoming a dad after my MS diagnosis

I was 20 when I was diagnosed with MS.

Urgent appeal: Help us be there for everyone with MS

Urgent appeal: Help us be there for everyone with MS